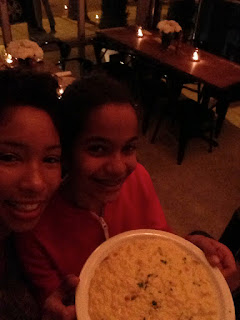 One of the best things about having a restaurant in Park Slope is the proximity to Asia's school. Most days, she walks in to Va Beh' right in time to try the daily specials. Last night, we shared risotto alla Milanese.

The name speaks for itself: This distinctive dish is native to Milan, Michele's home town. It gets its rich, red color from the addition of saffron but the flavor is very elegant and light.

According to legend, this dish has an exact birth date, 8th September 1574. The event is chronicled in the  Milan City Government Resolution of Recognition of Communal Denomination:  “That date had been set for the wedding of his daughter by the Belgian master glazer Valerio di Fiandra, who was working on the stained-glass windows of the Duomo, Milan’s cathedral, and for whom it apparently had a special meaning… During the wedding dinner appeared a rice dish coloured with saffron, a material that the crew of Belgian glazers, following Master Valerio, used to add to different colours to bring about particular chromatic effects. The rice prepared in that manner, perhaps as a joke, was enjoyed by everyone just as much for its flavour as for its colour; in those times pharmacological qualities were attributed to gold and, when this metal was lacking, to yellow substances”.

It will be on the menu for the next few days so come by or try this recipe at home.