Family, Friends and The Feast of Seven Fishes

Festa Dei Sette Pesci or The Feast of Seven Fishes originates from south Italy and literally means what it says: It is an elaborate meal consisting of seven kinds of fish. Seven, representing completion, in the realization of God's promise in the birth of Jesus. The holiday is also known as the Vigilia di Natale or the Vigil of Christmas, the decadent wait for midnight, and for some, the start of Christmas mass.

Our tradition is to spend this night at home with our best friends, Imani and Ray. We riff loosely on all the rest but try to stick to fish. This year, we were joined by Massi, one of Michele's oldest friends from Rozzano, and his family. We had a full house of four kids and six adults. It was a party and we were complete at ten. 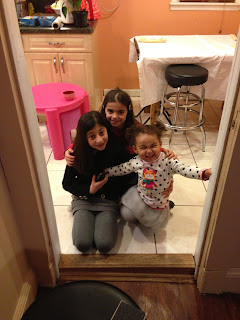 And a party is not a party at our house without pork so we started with a platter of prosciutto, salami, mortadella, pecorino, parmagiano reggiano and a bottle of Etude Pinot Noir, courtesy of the Rosarios. 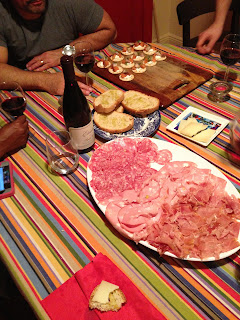 Our meat lust sated, we quietly began with the first two fish, smoked rainbow and lake trout, on crackers with creme fraiche and garnished with dill. 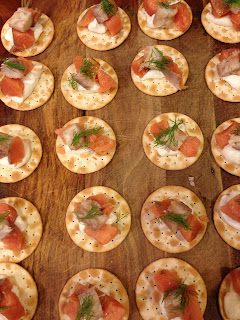 The third fish, crab cakes, were plated simply over a bed of arugula with balsamic viniagrette. 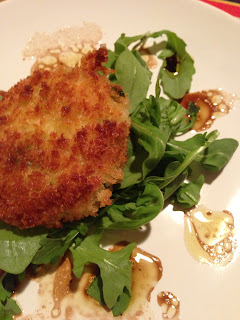 The fourth, grilled scallops with endive, went too fast for me to get a shot but they were perfectly seared and creamy, the perfect compliment to the bright endive.

Five, six and seven were lobster, baby scallops, and flounder tossed in a red-sauced linguine. 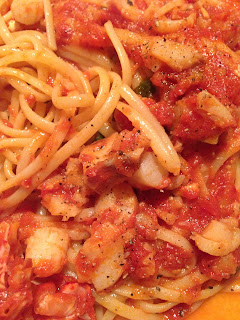 And, for good measure, we threw in a whole, salt baked red snapper. 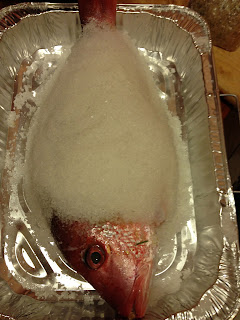 Like I said, our Christmas Eve is a loose, modern version of the traditional celebration, off the cuff and imperfect, like us and our motley crew of friends and family. I could go on about the bottles of wine or the four courses of desserts or the snow that was falling outside as we ate and laughed together but that would be overkill. The Seven Fishes sums it up. We were complete and content and perfect in gathering together around a tradition that we hope will last a lifetime.