"Red, Red Wine" and Reggae at the Barclay's 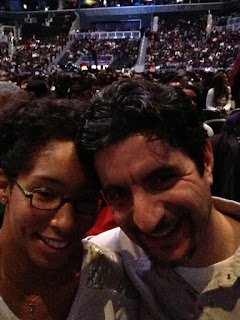 Last week, UB40 headlined the first reggae concert at The Barclay's. Michele had ordered premium tickets for us before the arena even opened so he was super excited. He has always loved reggae. It is his favorite music. Me? Not as much, but like a good wife, I went along for the ride.

And what a ride it turned out to be! Maxi Priest opened the show and warmed up the crowd with classic songs like "You're Body Can't Lie to Me" and some of his new material, which was actually very catchy. Shaggy went on next and ripped a hole in the place. He literally changed the energy in the room with strong performances like "It Wasn't Me" and "Boombastic" sprinkled with funny, dynamic interludes. Even I was on my feet.  He was charismatic and  funny and entertaining and I was pleasantly surprised by how much I enjoyed his set. Beres Hammond came on next.  He's an old-timer.  His set was more subdued with classic loves songs, but full of energy and emotion. Couples were slow dancing in the aisles.

By this time, it was 11pm. The concert was an hour behind because of technical difficulties and too much time taken between set changes. The crowd was coming down from their high and many were  walking out of the arena before the headliner, UB40, even got on stage. It was a shame because the band bore the brunt of the production issues. Their set began abruptly and was shortened dramatically and their unhappiness about this was clear. They rushed through their material without any real attempt to engage the crowd. The more they sang, the more people left until there was a continuos stream of folks heading towards the exits. I have never seen anything like this at a show, a headliner crooning not just to an uninterested crowd but to a crowd that was leaving in droves as he sang to them. It felt like that last, never-ending song at the end of a church service that gives everyone permission to say their "God bless you's" and head out. We walked out at the start of "Red, Red Wine", their last song.  It was a sad, colorless version of the dynamic song that we all grew up hearing on the radio.

Later, we sat over our own glasses of red wine at Blue Ribbon Brooklyn, subdued and puzzled about how a show that had started so strongly could end so dismally. Still, we had a great time and I ended the night liking reggae a little bit more.