And Until We Reach More Tropical Climes...

http://smittenkitchen.com/blog/2013/02/blood-orange-margaritas/?utm_source=feedburner&utm_medium=feed&utm_campaign=Feed%3A+smittenkitchen+%28smitten+kitchen%29
Posted by Unknown at 11:33 AM No comments: 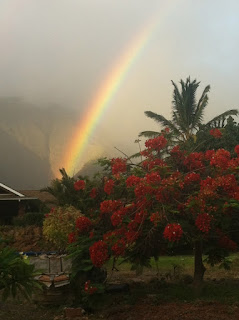 I took a little birthday hiatus but I am back! Thank you to all of my family and friends for celebrating with me and for making it memorable: The fiery Friday night with +Lauren Deatherage  and +Vadim Kokhnovitch  at Pok Pok, Saturday night sushi at home with Asia and Michele and the amazing soul food Sunday spread put out by my mom and dad. There will be subsequent posts elaborating more.

This post is about Michele's gift to me: Maui. We are going back in three weeks! For three weeks! And this trip will not be like any vacation we have ever taken or like any visit to Maui that we have made in the past. I started this blog with a post titled "Coming Home to Rainbows", listing all of the things we love about that little island. On this trip we will be going back with the intent to stay, finding an apartment, researching schools for Jada, taking meetings, planting the seeds of a new life there.

This process will be gradual. We will be back and forth for the next year, eventually setting down roots permanently. I hope to share the process with you here. Stay tuned!

Posted by Unknown at 1:32 AM No comments:

We Hope You Had a Happy Valentine's Day! 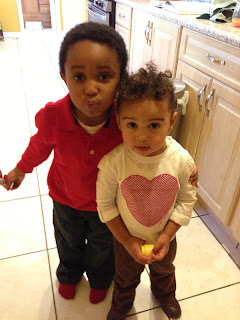 Posted by Unknown at 3:00 PM No comments:

MFK Fisher said, "It seems to me that our three basic needs, for food and security and love, are so mixed and mingled and intertwined that we cannot straightly think of one without the other."

Well, at least I am not alone. My relatively new family has heightened these universal yearnings and they are all jumbled to distraction for me. In fleeting moments of clarity, usually while doing something mundane and rhythmic, like chopping onions or stirring a soup, I can see the order of it all:

Now, meals are not food. And meals are not love. Meals are not security. Meals are the place where all three of these things meet. And every night, I dice and stir and sweat over the stove, practicing this primal alchemy, pursuing happiness, meeting spiritual needs through the physical.

And after the meal, when our bodies are satisfied and the remembrance of all the little things lacking creep in with the grumbles of the hungers of other needs, the roof that may need repair or that bill left unpaid, it is easy to imagine that the magic has slipped away. But no, the beauty of meals is that they are inbibed. They literally become a part of you. You are reassured. You are comforted. You are loved.

Posted by Unknown at 4:15 PM No comments:

The Thanksgiving of Finger Food

I am not a football fan but I love the Superbowl. It's not that it's the most watched event in the country. I'm not jumping on the pop culture band wagon here. I love it because it is an unofficial national holiday, more culturally hallowed than others more recognized. And for me, Superbowl Sunday is the Thanksgiving of finger food. Families gather solemnly around coffee tables topped with bowls of nachos, plates of pigs-in-blankets, stacks of sliders, guacamole and chips. Plebeian libations of beer and soda are elevated this day, shrouded in sleeves, seated on coasters, and honored with million dollar ads between plays on TV. Utensils are put away. Paper towels reign, ubiquitious catch-alls for grub or garbage alike. Superbowl Sunday is a simpler Sunday, our priorities clear and our attention undivided.

This year, we gathered around my brother's coffee table and sat in front of the shrine of his sixty inch TV with his girlfriend and her family and their bulldog aptly named Champion. The perfect occasion for a first time gathering of the clans, we ate and watched the game and laughed at commercials and did what millions of other American families do on this day. One, big happy family of people that had never met, sharing an understanding and a culture over paper plates, processed food and football.
Posted by Unknown at 3:25 AM No comments:

So, the fallout from last week's cold blast continued at our house with frozen pipes that burst when the weather broke. I can't cook under these kinds of circumstances, so I picked up the only delivery menu in the house, Island Garden Chinese Food. I don't know why I always go through the process of reading the whole menu, all two hundred options, but as I re-circled my go-to items (chicken and broccoli, lo mein and chicken wings with french fries),  I got to thinking: Why Chinese? After pizza, it is the quintessential American choice for delivery. There are more Chinese restaurants in the US than McDonald's and Burger King's combined. How did it become such a big part of our food culture? What's the back story here?

I dug a little deeper as I waited for my delivery and I found the first known ad for Chinese delivery in the US, circa 1929. Pretty ballsy, considering that at this time in America, the Chinese were ostracized and avoided. The restaurants back then served accessible dishes like chop suey and sweet and sour pork, as well as "French fried potatoes", appealing to our palates with just enough familiarity to put us at ease. The cuisine became progressively popular after the World Wars and by the 1960s, there was  an explosion of acceptance in the United States. Chinese restaurants were in vogue, exotic and hangouts for the suburban middle class and the urban hipster.

Today, Chinese delivery is the saving grace of over-extended moms like me, college kids on limited budgets and single city dwellers. When times are tough or you are stretched too thin or you just don't feel like picking up a pot, those hot white boxes of steaming rice and simmering sauces on the other side of your door, twenty minutes after you put in a call, are the ultimate fast food.