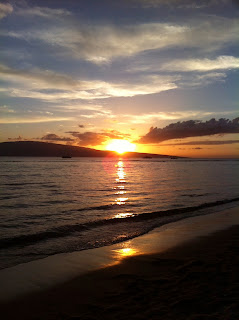 Maui slows down on Sundays, so we did too. No one takes meetings. People don't answer phones. They unplug and connect with what counts: friends, family, God.

We spent the morning on the beach, had a simple lunch in and an early afternoon walk along Front Street. There was a craft fair happening under the Old Banyan Tree, in front of the Lahaina Courthouse and the harbor. 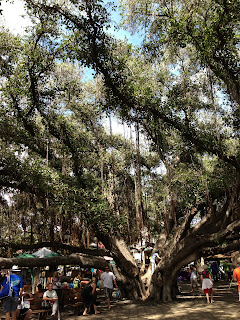 This banyan is one of the largest in the US, at 60 feet tall and 200 feet wide. It literally drapes over an entire city block, with twisted trunks and branches creating it's own sudden, little eco-system in the middle of a sunny strip.

Planted to commemorate their 50th anniversary of conversions, Christian missionaries planted the tree in 1873. It's flourishing could be seen as a symbol of God's approval. What is clear is the undeniable impact and importance of religion on the island. There are countless churches here, of all denominations, sometimes two for every block. Hawaiian culture has not been lost in all of this. In fact, it has been gracefully preserved, as in other parts of the world, and folded seamlessly in to the Christian value system- one strengthening the other.

On our way back home, we passed the The Holy Innocents Episcopal Church. Open air, powerful Hawaiian hymns rang out from parishioners dressed in traditional Hawaiian garb, men in suit jackets and a light skirt, feet bare or flip-flopped. The old and the new joined together, creating something distinct and unique. I thought that it was worth sharing with you.