I knew that I wanted to buy Michele a grill for Father's Day. I also knew he'd want to choose it himself. So, as soon as we got to Maui, I began badgering him about picking one up before the Father's Day rush. Granted, we were very busy settling in and closing the deal for our new restaurant space, so I only bristled a little when he brushed me off.

So Saturday morning rolls around and I'm like, "Look. We need to get this grill. I want to barbecue tomorrow. We'll be lucky if they even deliver it to us today."

We head to Home Depot. The grills are lined up in shiny rows outside. Michele jumps out of the car, "I'll be quick! You guys wait here."

About fifteen minutes go by. I'm thinking he's found something he likes. But he walks back to the car and slumps in to his seat.

He shook his head, "No. The lady in front of me literally bought the last one that I wanted."

This is a bummer and I had to bite my lip to stop myself from saying, "I told you so..."

Anyway, to make a long story short, we circled the area and stopped at Lowe's and Costco. No luck. Nothing was a beautiful as the five-burner, gas Char-Broil grill that he'd seen at Home Depot and he didn't want to settle.

Still holding on to my dream of a Father's Day barbecue, I suggested that we go back to Home Depot. There had to be someone we could talk to or some way to get this grill. I was going in with him this time, baby in tow.

A nice woman greeted us in the grill department as Michele glared gloomily at the three and four burner grills. "How can I help you?" she asked.

She couldn't work wonders, it turned out. The grill that he wanted was indeed sold out and she did not know when it would be re-stocked or if it would be sold for the same special, Father's Day price.  So, we chose a smaller model and kept it moving. I wandered in to the gardening section while Michele waited for her to process our order.

A few minutes later, while I was hovering over the orchids, she sped by me and yelled over her shoulder, "I found the grill he wanted!"

Turns out there was a lone box in the stock area that everyone had overlooked- and it was all ours. They couldn't get it to us in time for Father's Day but was of no consequence. Michele was smiling from ear to ear. 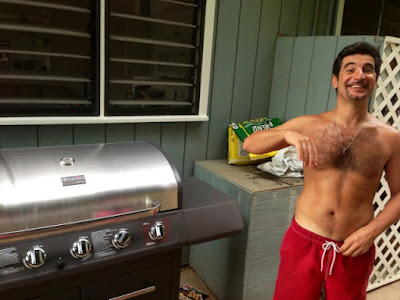 Here's what we made when we got it home:

We took a whole chicken and stuffed it with herbs on hand, thyme and rosemary. Then we rubbed it with salt and pepper and slathered a bottle of barbecue sauce all over it. We lit burners on either side of the grill at 300 degrees and placed the bird in the center of the grill, over the dormant burners, to let it cook slow and low with ambient heat. (Michele's brilliant idea.) 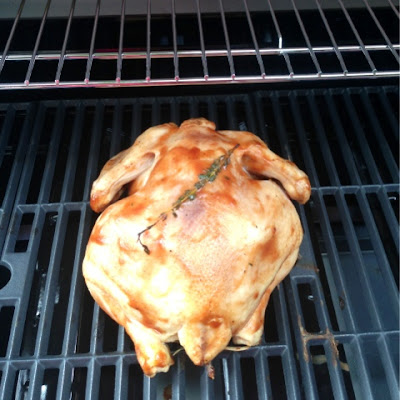 We left to take a dip in the pool and this is what we found two hours later: 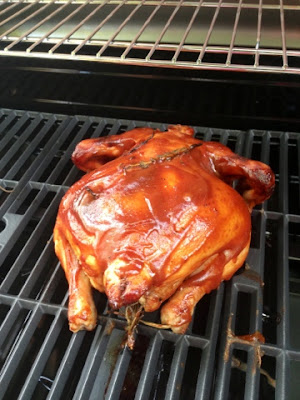 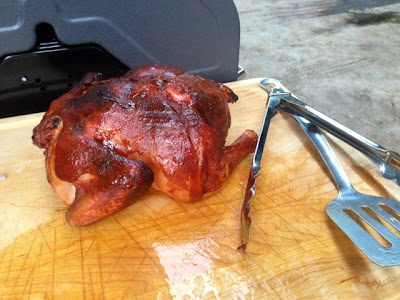 It was the most beautiful chicken we had ever seen. It almost looked like duck. The skin was a tight seal of deep flavor that held in the succulent, flavorful meat. 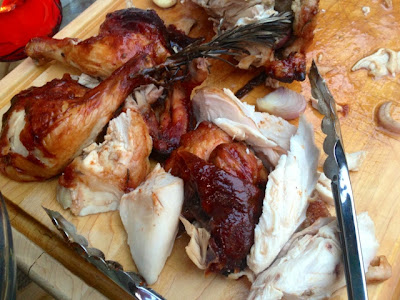 It fell off the bone as soon as we opened it up. And it was gone, just as quickly. The best chicken ever, hands down, home cooked or otherwise, in Italy or America or anywhere else in the world. Make this and you will not be disappointed.